Cyanic acid Others Cyanate, also known as Cyanic acid or [C(N)OH], is classified as a cyanate. Cyanates are organic compounds containing the cyanate functional group with the formula [OCN]-. Cyanate is considered a soluble (in water), acidic compound. Cyanate may be a unique E. coli metabolite. The cyanate ion is an anion consisting of one oxygen atom, one carbon atom, and one nitrogen atom, [OCN], in that order. The cyanate ion possesses 1 unit of negative charge, borne mainly by the nitrogen atom. In organic compounds the cyanate group is a functional group. ; The cyanate ion is an ambident nucleophile in nucleophilic substitution because it can react to form an alkyl cyanate R-OCN (exception) or an alkyl isocyanate R-NCO (rule). Aryl cyanates (C6H5OCN) can be formed by a reaction of phenol with cyanogen chloride (ClCN) in the presence of a base. The cyanate ion is relatively non-toxic in comparison with cyanides. Use of this fact is made in cyanide decontamination processes where a permanganate oxidation converts toxic cyanide to safer cyanate. Cyanate can be decomposed by the enzyme cyanate lyase (or cyanase), which is found in bacteria and plants. In particular cyanate can be decomposed to carbamate (ammonia) and carbon dioxide. Alternately the same enzyme can be used to synthesize cyanate using carbamate and carbon dioxide.
Cyanic acid is a one-carbon compound and a pseudohalogen oxoacid. It is a conjugate acid of a cyanate. It is a tautomer of an isocyanic acid. 43.025 g/mol
inquiry $ $99 In stock
Formulation: 43.025 g/mol
Source:
Usage: 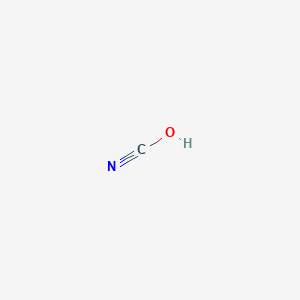